The images look at us, they call us in an emotional way with their wisdom; decrypting them is like getting lost in the forest to find yourself without being harnessed by nonsense.

Neuroscientists speak of an area of ​​the brain called the claustro where consciousness is located. Consciousness is quality of the mind which includes other qualities, for example, subjectivity, self-awareness and knowledge which is the ability to identify the relationships between the self and one’s surroundings. We have in the conscious mind (which can be lost with deep sleep or with anesthesia) the self that introduces the subjective point of view. We are fully conscious only when we recognize the self. Antonio Damasio

From the first visual communications, the word, the images and the consciousness that underlies them are the humus of the peoples. As Damasio says in Descartes’ Error: all the perceptual images recalled by a real past, and by plans for the future, are constructions of the brain that manifest themselves in consciousness correlated with others that moment by moment constitute the neural basis of the self giving it the subjectivity.

Perception is related to the individual’s school and social culture. Over time, man developed the ability to see images having at the dawn of civilization the experience of representations that recalled the schematic outline of the object, essential signs for conveying a thought, a prayer with narrative purpose.

It is easy to deduce that when the thought-image must be transposed into a readable form(2), the signs of the expressive elements of the image must be physically processed. During the transhumance of the mental trace in sign, this acquires the value of self-enunciation, and the image, in a metaphorical sense, gradually acquires self-awareness properties since the feeling of the creator transmigrates in it and manages to make the elaborate live , the emotions. As if to say that the “emotional information”, transfigured into signs that enter the composition of the image, give it the cogito(3). The self of the image that is self-awareness offers music that enters the fortress of the pleasure of the observer who senses its spirit.

In the paragraphs marked with I. we give the floor to the images that alternate with the narrator.

I .: The writing actually intervenes in the silent message between us images and the observer; it’s a party, where we can be what we want, we struggle in the manner of a body in action taken from our role of truffle hunting. We images are carriers of sensations and emotions that have no logical explanations. The observer is struck by our staging which does not have an analytical character but an announcement. A third voice, the narrator, intervenes and comes into contact with us images, reveals the message, and the excited observer leaves the reality of the work and understands it.

The power of the images derives from a continuous oscillation between different possible readings that leave the viewer in a sort of paralysis. What the images want does not coincide with the message. They want to be considered as complex individuals who take on a multiplicity of subjective and identity positions. W. J. T. Mitchel proposes images not as objects but as subjects endowed with personality, needs and desires. More than what they mean, one wonders what they want, in view of their ability to influence and seduce with their own desires, which must be listened to and described to make man’s assessment of their power and the way in which they are more refined. it operates.(4)

The evolution of recent decades has led us to consider the image and its omnipresence as an essential element of society. The invention and the diffusion of the concept “acte d’image” is a fundamental question to know if an autonomous activity can be recognized in images. Therefore research is important to fix the activity of images in a thought. Sartre in his “Being and nothing” materializes the thought: “The image is an act and not a thing” (Sartre). In “Theorie de l’acte d’image”(5) Horst Bredekamp analyzes more than two hundred images in order to develop their theory. In this way we can have a hint of the specific power enclosed in the image.

I .: We images catalyze ideas to make the attention of the observer more active and lively and we do not use man to exist but to help him understand himself. Man, a poetic animal, is thirsty for symbolic and we images offer ourselves with a happy composition of canvas, color, light, tone, contrast, sign, perspective, brilliance, meaning and signifier. Our soul is nothing but ferment of matter.

After all, the image heals men’s sadness, since their brain is constantly fighting against boredom, and helps to repair their traumas. In the house with many images, man finds the value of refuge in the ways of reflection. The images allow you to try to understand the incomprehensible but also to get out of sadness, apathy and solitude by bringing a sense to their tone, just as the mother brings feeling to the child. They are the objects of life and pass on the memory and cultural heritage, similarly to what happened to the ancient Egyptians who entrusted the soul of their loved ones to the objects. They enclose stories and in the gallery of man’s imagination they constitute visual-thought as if it were a kite in space. 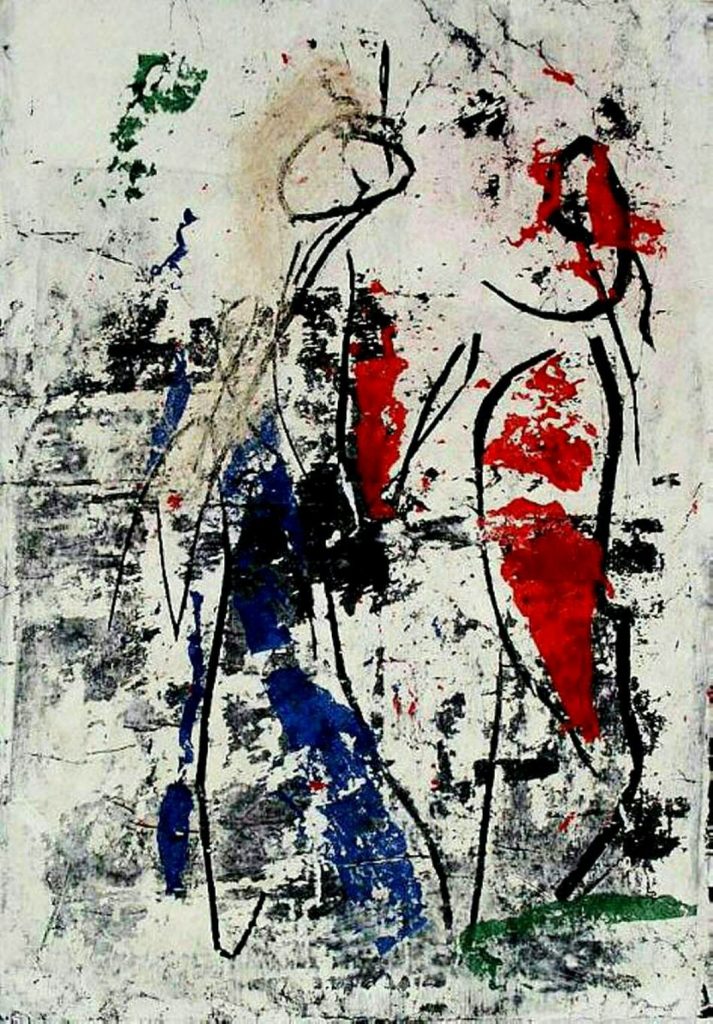 In the image each trait has its own history and of the present must not give an explanation except in materialization. In my image there is a narrative and an environment based on the division of the tracks by transforming the canvas with a space that welcomes the gesture and in the constructive ability reconciles and brings together. I am an inhabited painting and my various features have been articulated walking by connecting in a cohesive whole. Paolo Ambrosio me fecit, 2002, Danseuses, mixed media on canvas, cm. 125×80