Humanity has used the instrument of reason to emancipate itself.

The imagination crosses history and governs us by revealing our aesthetic preferences. Emotions find their mental order similarly to what happens when we find ourselves on the train in front of the flow of the landscape and evaluate the complex of elements in their functional relationships.

The mind collides with the plurivocal condition of art which seems to drag our imaginative capacity into an interpretative difficulty. In this condition, the frontier between true and false and between virtual and real is suspended. For this reason, the personal vision of the world is not an interior choice but a research project that allows the creator to be possibly unique in his choice of spiritual identity.

I .: By seeing man takes possession of us images in relation to the past, while looking is only an approach to the search for immediate stimuli. It would therefore also be useful for us to understand what the mechanisms of perception of man are today. In this way we could improve ourselves for the needs of the digital society since being oneself is the challenge of every existence with respect to the assigned environment. Our image identity can be a dynamic phenomenon, a relational bricolage of a narcissistic order that takes into account society without having to totally depend on it. We are a hyper-individualistic story in the dialogue between us and the public. All this emphasizes our ability to make people understand a narrative richer in identity. We images can only be considered such if the perception of us will provoke an ever new aesthetic-cognitive event in the observer. 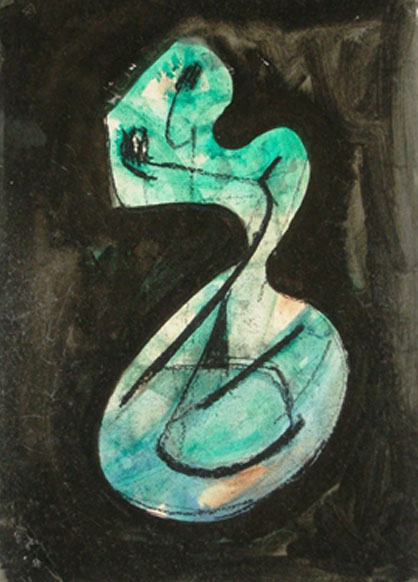 My curved lines evoke the growths of something soft and velvety, in communicating energy they make the lyric element, the movement, resonate. We feed on everything and I learned to extract life from junk as from beauty.

To respond to these thoughts, we take inspiration from the knowledge acquired so far in terms of perception, considering the mystery of painting through which appearance is restored as fundamental. The image, whether it is a photograph or an illustration, can also be created in such a way that the mystery of appearance finds its fulfillment in the enigmatic nature of the execution.

Man could overcome the cognitive distance between reading and looking through the multi-factorial approach, which is the theme of this essay, through the scientific repertoire of the emotional path mentioned here.(2)

The images are managed in a totally different way, through increasingly personal influences. The melee between the artist’s thinking and doing takes a long time to find a solution in transposing the idea into the two-dimensionality of the canvas.

I .: Painting is a lucid emanation of the author’s energy. Latent energy that allows me to work, forgetting my past as an object, to have a dignity as a subject endowed with dialectics and also with conscience. I imagine, between occasion and hidden sense, I was generated by a hand with an experience acquired first with the design of the human figure from life and then with the evolution of the sign in free abstraction. Sign-gestural habits have thus been established to transform the thing that is itself and that happens because of events into a sign, while reason, by virtue of an interpreting eye, is capable of using the means without preconceptions. In feeling built, I understand that the artist does a mental work no different from what happened in ancient times and retains a model – inside, gesture, sign, outline – as a memory already acquired by man analogous to the language of cave paintings. Creativity is an amalgam of intuition and reason and if the scientist has much in common with the artist or the poet at the level of logical thinking and analytical ability, intuitions and creative processes operate at the level of the unconscious, for the benefit of artist. The hidden or implicit intentions of us images are not for the public a romantic theater scene but a real factory of desire, vitality of the unconscious. We are reduced to invariants as visual concepts and symbolized in neural activity being reconstructed by a reworking of information useful to bring out the waiting – image memory. These properties of the cerebral cortex to encode the contours of us images are the brain kit of all men. The emotions induced by us and which have accumulated over time make us perceive that the artist’s thought acts in the “imagined space” in a continuous alternation of thoughts that come from known and unknown inductors. From nothing the artist compares his experience of the real of the surrounding world with the mechanisms of the phylogenetic order.(4)

The reading experience goes through three phases. The subject considers the essence of the work and then the eye explores the same subject in detail. The interaction between peripheral vision and complete perception is accomplished with a forward-backward movement between the visual indicators of the moment and an existing mental image to obtain an appreciation for this. Aesthetic preference thus depends on the visual pleasure of cultural values ​​and on the importance of the emotional experience of the work of the beholder. Beauty stimulates brain reward centers accentuated by perceptual indices active in other areas of the brain. The cognition and emotion generated by a sensorial stimulus provoked by us images are two distinctive but essential elements in the experience of art. There are therefore aesthetic preferences of the unconscious. The works considered masterpieces form a standard to which the other works are compared. It can be said that the masterpieces exceed the horizons of our image expectations by generating a set of cognitive, visual and emotional associations. The quality of a work inherent in the image can be recognized. Experts employ their experience more effectively and economically than a novice. The more things are recognized, the more we have references and the less we mobilize areas of the brain. In some ways, the expert, with considerable work and predisposition, automates his critical journey.(5)

In an image lives its entire history, an image that is perceived today in an extremely limited time, which has nothing more to do with the reading times of a book. The images, welcoming the viewer, ask a question that does not require an answer, but simply activates the device of the perception of the expressed quality.

Freedberg and Gallese illustrate the neural mechanisms that support the empathic power of images and demonstrate that the embodied simulation and the empathic feelings generated by it play a crucial role. “The discovery of mirror neurons in the monkey and similar imitative mechanisms in the human brain, together with the new importance assumed by emotional processes in the field of social perception, have changed our knowledge of the neural basis of social interaction by throwing new light on ways in whom we empathize with others. ” (6) From Damasio we learn that our ability to make sense in a prerational way to the actions, emotions and sensations of others depend on the embodied simulation, a functional mechanism through which the actions, emotions and sensations we have activate our internal representations of body spaces associated with those social stimuli of “as if” we lived the same action, emotion and sensation.

Visual literature, and in particular that of comics, provides a great tool for communication and understanding of one’s own and others’ emotions. The difficulty inherent in abstract concepts is overcome by a perfect cognitive balance achieved through the hybridization of contents with the visual approach. His great freedom is due to the instantaneousness of the image, more immediate than the word. This new dimension of cultural-artistic evolution that comics represent is like a catwalk of help thrown forward, capable of leading far as in a biological chain.